Take advantage of corporate rates at many Montreal and Canadian hotels. Ask for the CONCORDIA UNIVERSITY corporate rate when booking.

How to get there

The conference will be hosted downtown on the Sir George Williams Campus (SGW), within walking distance to movie theatres, shops, the underground city, and public transportation. Get directions.

Montreal is the second-largest French-speaking city in the world after Paris. While the city’s official language is French, Montreal is easy to navigate for both English and French speakers. Meeting new people is a great way to expand your knowledge of a second (or third!) language.

Bilingualism is a part of Montreal’s strong cultural tradition and adds to the inspiring atmosphere of art, music, literature and innovative technology. From a history of cutting-edge architecture to icons like Leonard Cohen and Mordechai Richler, to storied Old Montreal and the legendary Schwartz’s Deli, the city thrives on art, culture and history.

Montreal is known for its festivals which run one after another all summer long, but festival season never really ends, in this city there is always something to celebrate!

Visit Tourism Montreal to find out what’s going on. 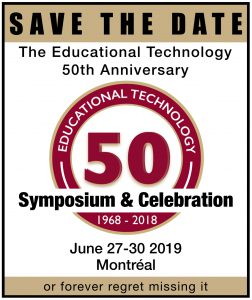 What makes our EdTech programs unique?